Ubisoft is quite famous for releasing various collector’s editions for each of its game, and Assassin’s Creed Unity won’t be an exception. The next installment of the well-known franchise will also be available in more than one limited version: meet the many different special editions of Assassin’s Creed Unity!

You can pre-order this one for €69.99, and for that price, you will not only get some extra in-game content, but also a lot of physical stuff, such as a soundtrack disc and an artbook. It’s just a bit more expensive than the regular edition, but if you like the extras below, we think it’s a really good deal for you. 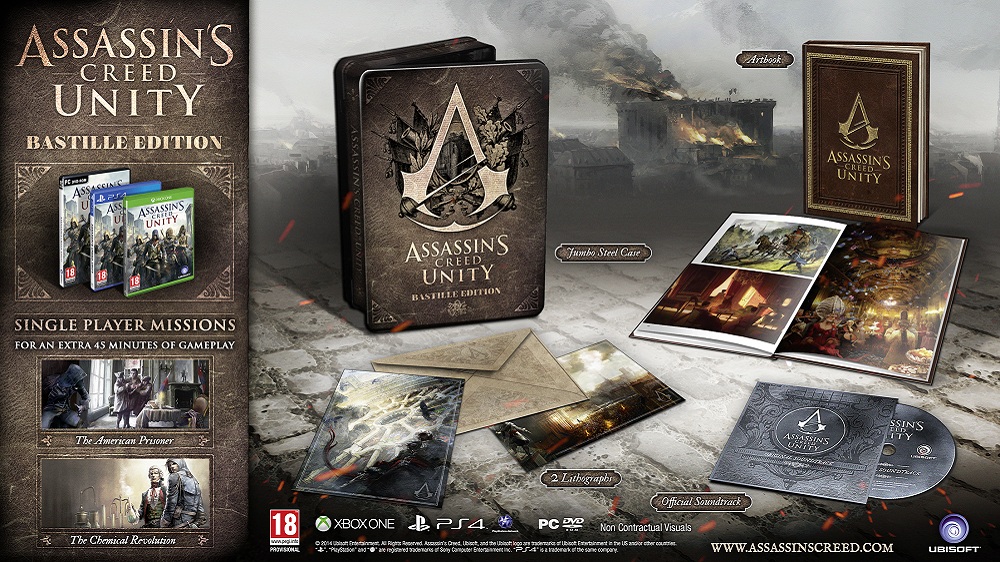 This one is a bit pricier, since it costs €89.99, but in exchange, you get more extras. It contains everything which you can find in the Bastille Edition, and in addition, a huge Arno figurine and a nice looking collector’s box will also be yours. You can check all of the contents below. 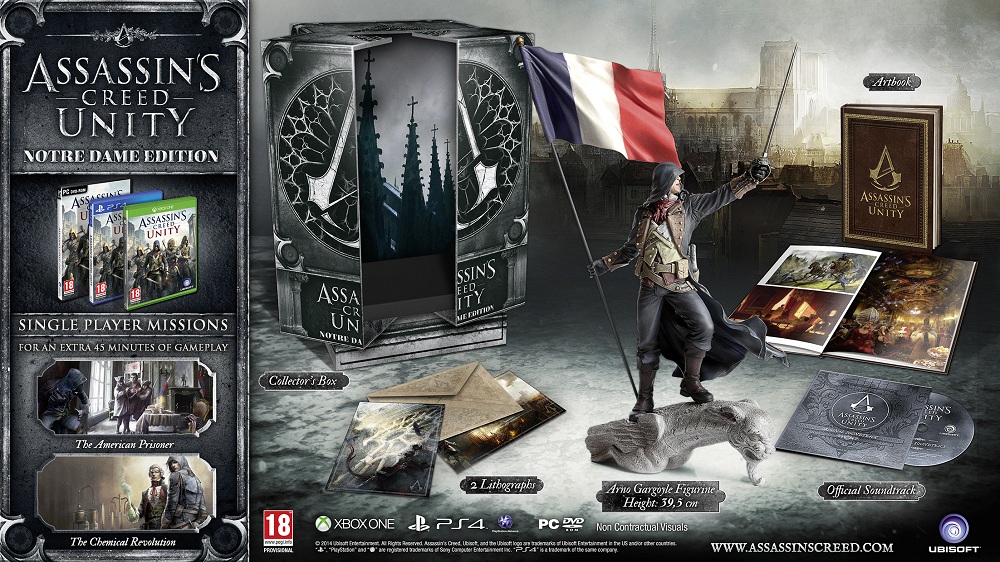 If you want to own the most extras, then this one is definitely for you. For €139.99, you get a badass statue, which depicts Arno and a bloody guillotine, a special case for the game disc, a music box, and various other goodies. It’s important to know that this edition is only available for pre-order via the Uplay Shop. 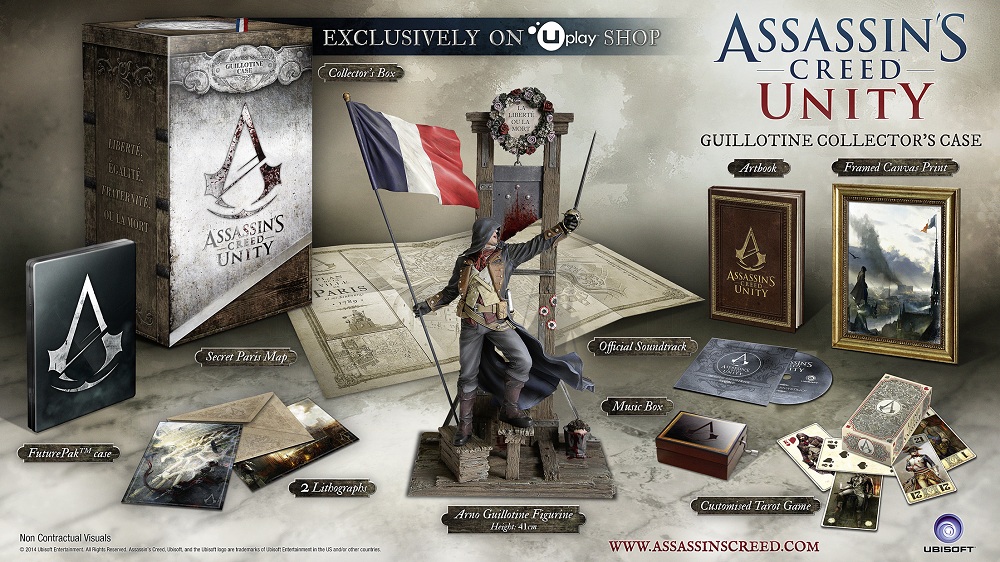 Gamers who pre-order Unity digitally or physically on the Uplay shop will get various extra in-game contents.The future owners of the physical version will receive a 30 minutes long mission called “The Chemical Revolution”, The Prussian Pack, the Musketeer Pack, and the Shooter Pack. All of these packs contains bonus weapons and gears.

Those who pre-order the digital version of Assassin’s Creed Unity on Uplay will also get the additional mission, and the Royal Arsenal Pack – the latter gives players 2 gears and 1 weapon. 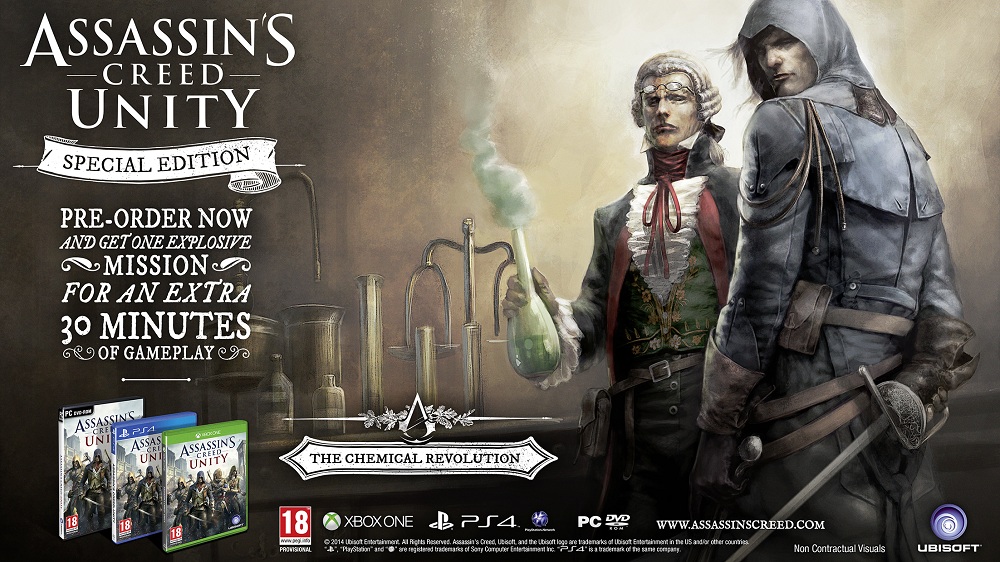 For $129.99, there is Assassin’s Creed Unity Collector’s Edition, which features various physical and in-game contents for its price. There is a 16” Arno figurine in the box, as well as an artbook, music box and the official soundtrack on a separate disc. For additional in game content, the owners of the Collector’s Edition get 2 bonus missions, so they can expand their playtime with a few hours. 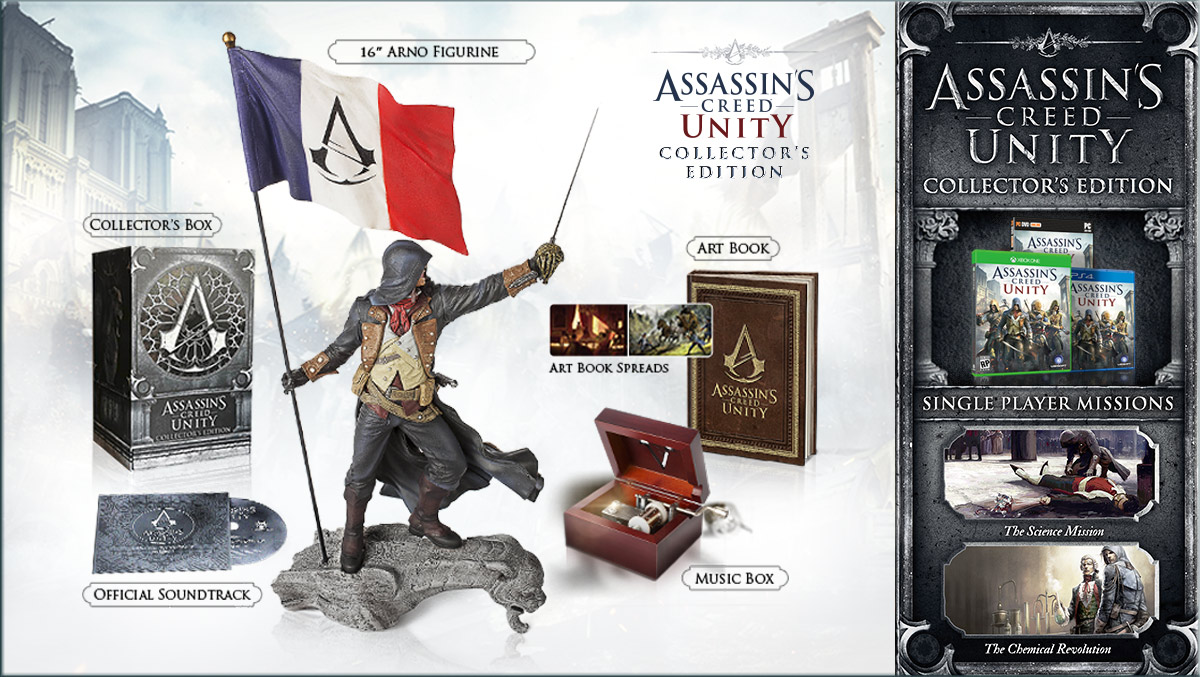 British retailer GAME offers an exclusive edition of Assassin’s Creed Unity for its customers. The Revolution Edition costs £79.99 and it comes with four in-game contents: “The Chemical Revolution” mission, the Prussian Pack, Musketeer Pack and Shooter Pack. For those who like additional digital extras, this is definitely a good choice.

However, this is not all, since GAME also offers the Executioners Pack as a bonus. This features various physical extras as well, such as a set of 4 Assassin’s Creed shot glasses, a nice looking beanie, and a stylish guillotine bottle opener. 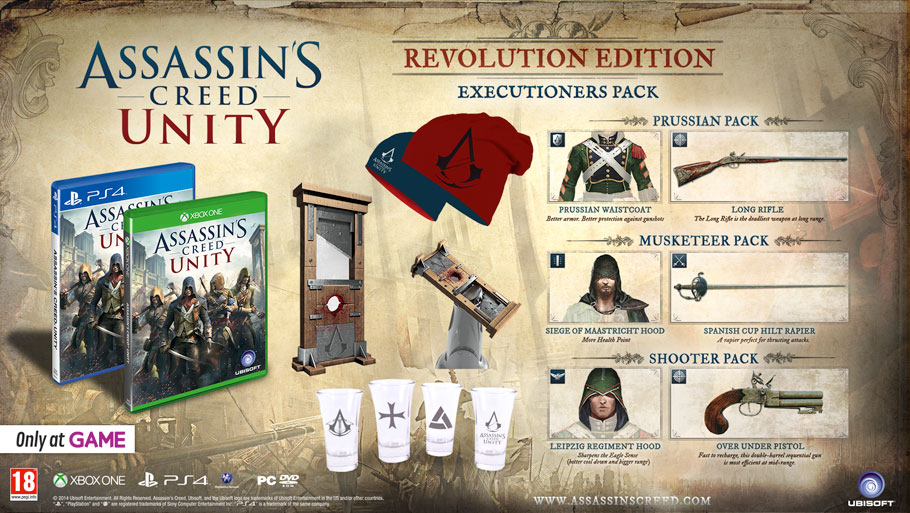 Fans who want a bit of physical and in game extras will benefit with Amazon’s offer. For the price of £69.99, the Assassin’s Creed Unity Amazon Edition features a really cool collector’s box – in it, you can find the replica of Arno’s pocket watch. As an in-game content, this version also has the mission called “The Chemical Revolution”, as well as the exclusive Parade Pistol. 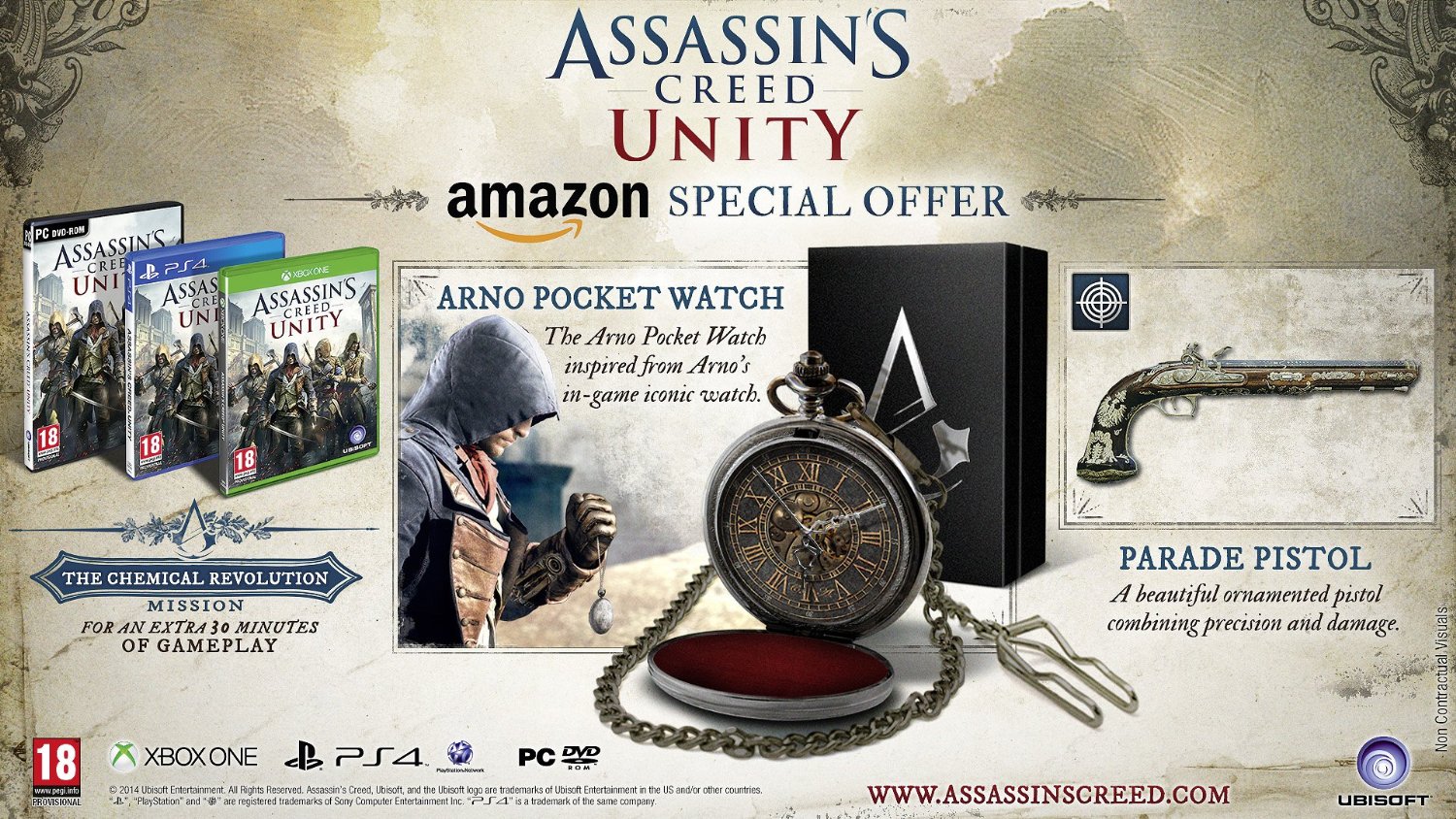 Gamestop also has a unique offer for everybody who pre-orders Assassin’s Creed Unity. If you secure your own copy of the game from them, you will receive an exclusive weapon, the “Razorhead Spear”, the “Chemical Revolution” bonus mission, and a special “Spin to Win” opportunity. This gives you the chance to win awesome prizes every friday. The prizes varies from in-game content to Assassin’s Creed Unity skinned consoles and home entertainment systems. You can even win trips to certain places! 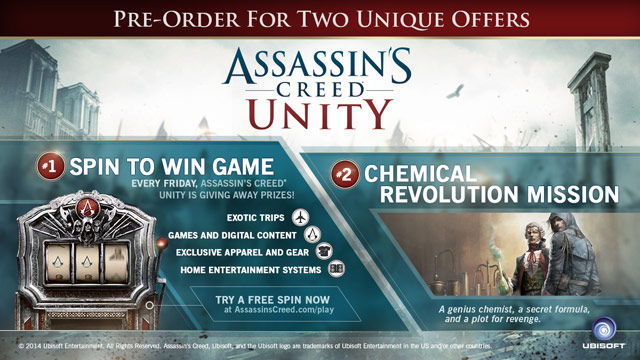 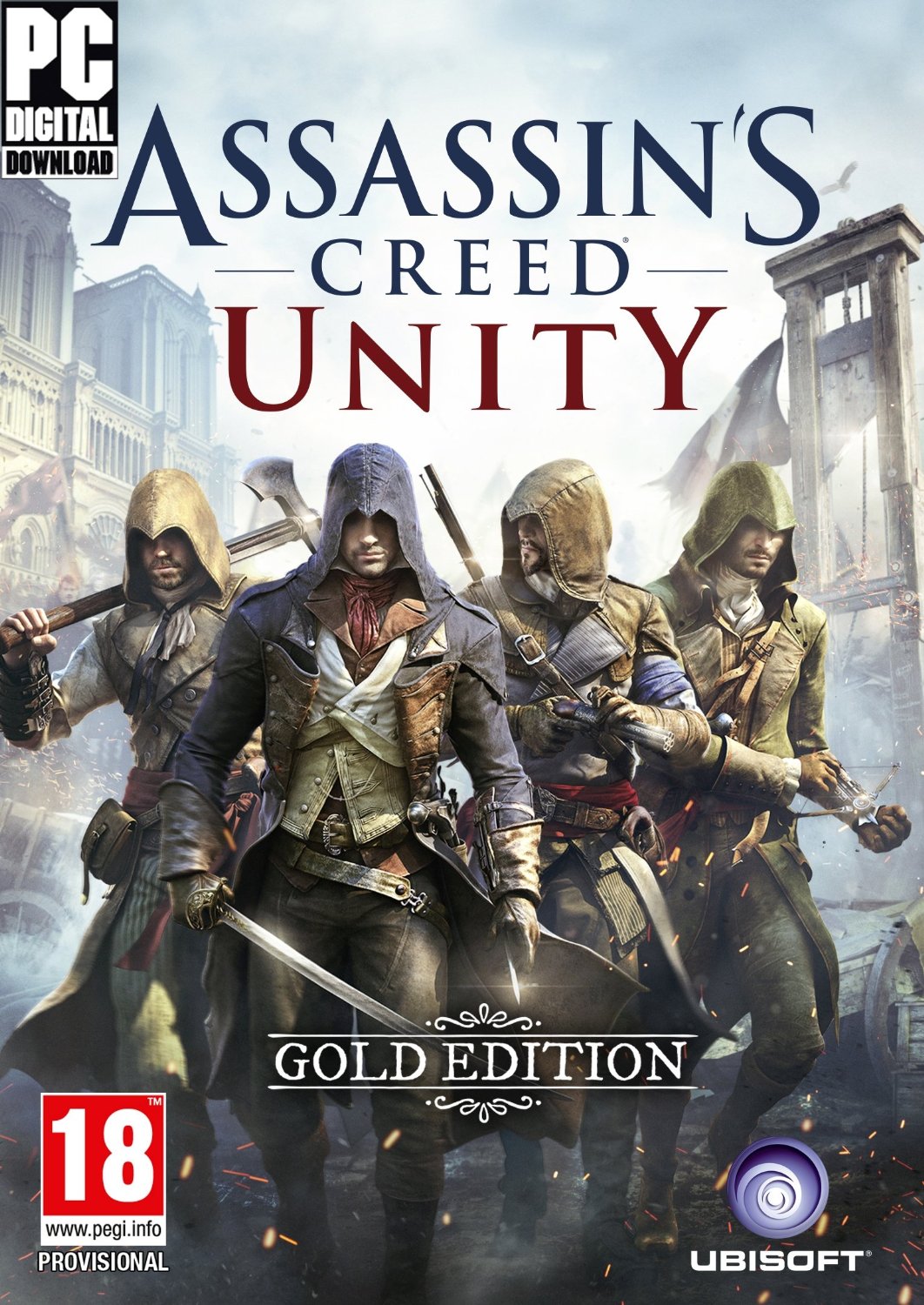 Still want more? Then you’re in luck! Although some of the special editions come with their own figurine, you can also get this badass statue of Arno for €39.95. The 24 cm tall statue is called “Arno, The Fearless Assassin”, and you can already tell that it will look really cool in your collection. 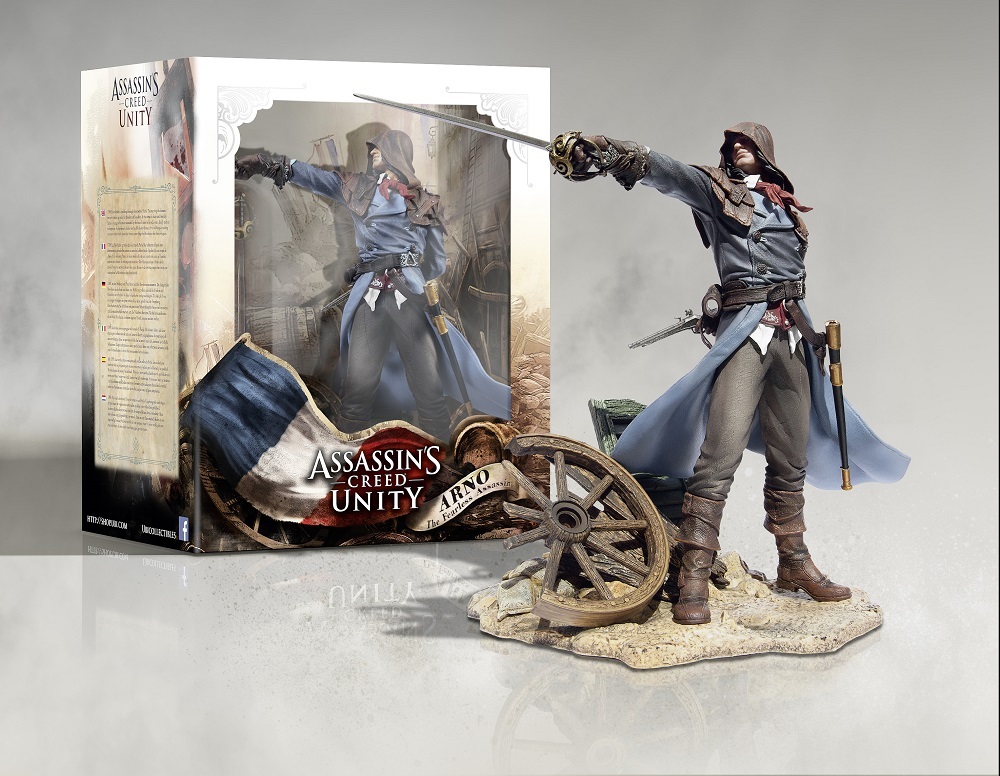 If you don’t like figurines, there’s still something for you. McFarlane Toys created a faithful replica of Arno’s deadly phantom blade, which will be available from October 28, 2014, for $59.99. One of the coolest things about this hand-crafted replica is that it will have retractable crossbow arms. It will be a unique piece of every Assassin’s Creed fan’s collection. 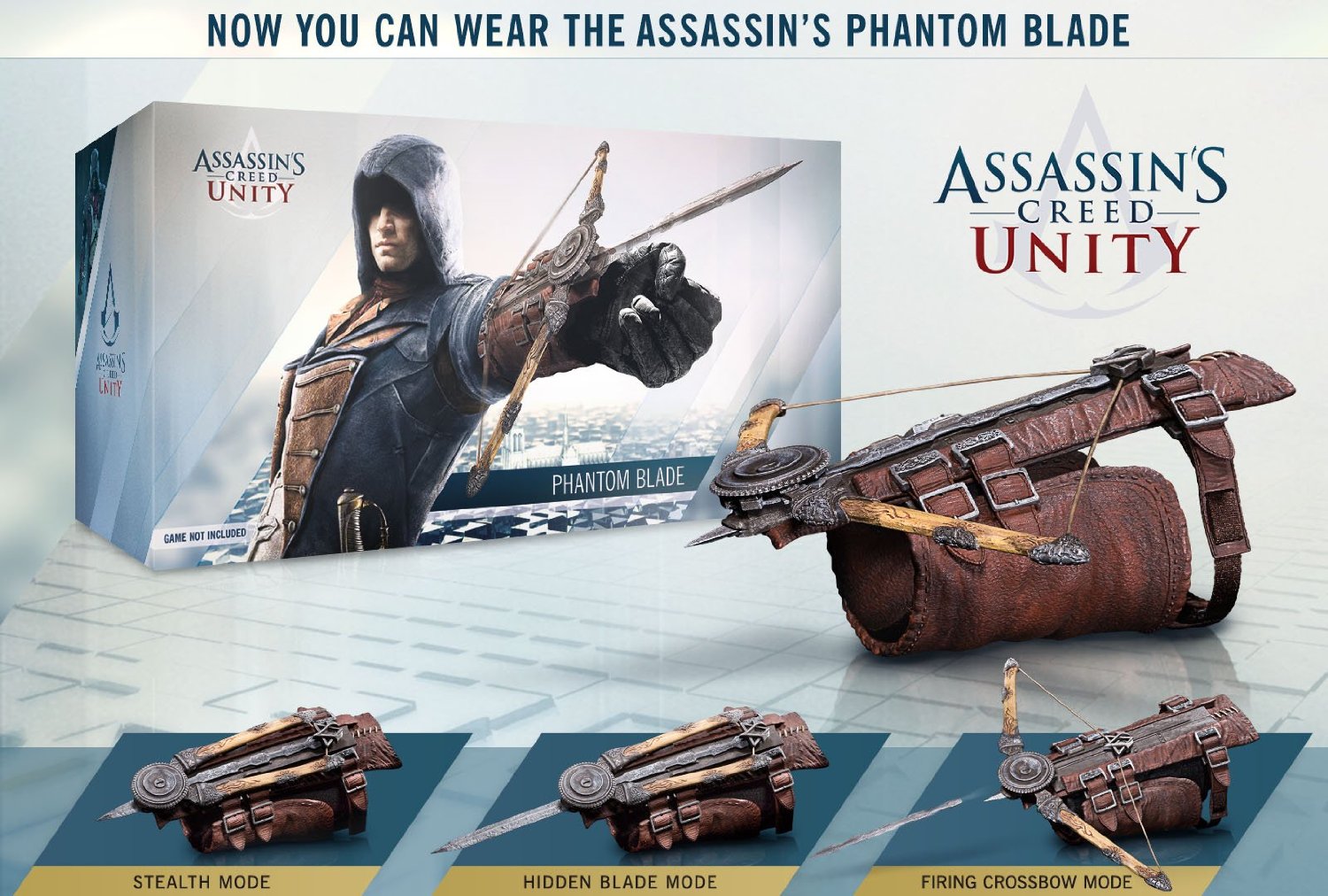 Check out the unboxing video here

Which one of the various offers do you like the most? Tell us in the comments!