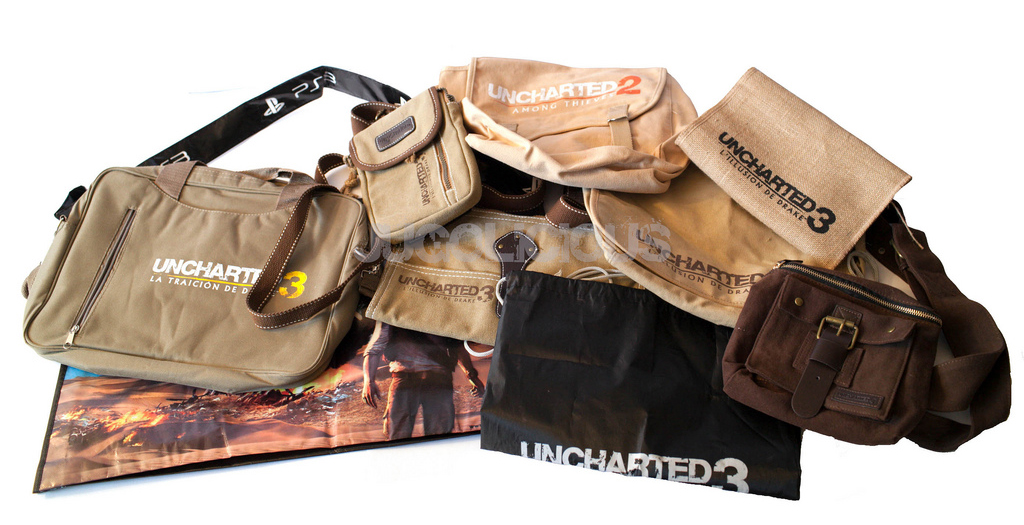 We recently updated our Flickr page, when we ran into an outstanding Uncharted collection. It didn’t only included special editions of the series, but a lot of unique items as well. We were really curious about how this collection was born, so we decided to make an interview with the owner, Timon Wong. Enjoy! 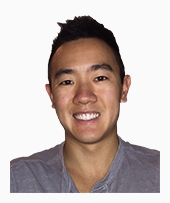 “Hi WE collect games, my name is Timon Wong, age 25, living in Ontario, Canada. My favourite games include the Uncharted and Pokemon series. I started collecting games at the age of 22 and had to stop at 24. I have met a lot of wonderful people with this hobby, including leaders in the gaming industry. I am a moderator at www.collectorsedition.org, a forum dedicated to people who collect video games.”


WE: When and why did you decide to start collecting Uncharted games?

Timon: I started collecting games when I was 22, in the middle of of my university degree. At first, I was collecting every collector’s edition for any game that intrigued me. As a student, it wasn’t great on my wallet at all, and wasn’t viable long term. It was time for a change, and I decided to it made more sense to stick with one series to collect from. Nintendo offers many merchandises, but not collector’s editions for their games, so Uncharted was my game of choice to collect from. Naughty Dog offers plenty of interesting collector editions and memorabilias for the Uncharted series from all around the world.

WE: Which was your first special edition and where did you get it from?

Timon: My first special edition was the Uncharted 2: Among Thieves Limited Edition from the UK. I got this one off a good friend, and I was very lucky to obtain it early into my collecting days, as it was very hard to find a sealed PAL one later on. It was also in a good enough condition for me to grade it by VGA. To my surprise, I got a 90 grade (I expected 85 or 85+), which the edition that much more special to me. 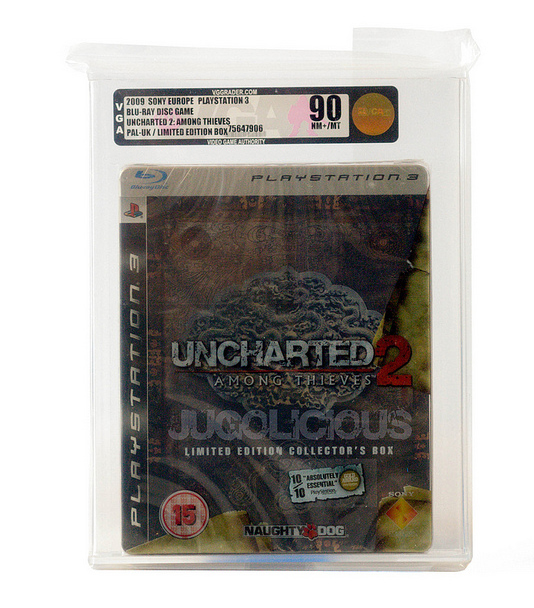 WE: What are the main criteria to include a game in your collection?

Timon: I wanted to collect everything there was related to Uncharted that was official. I have seen some really cool fan-made projects, but I thought it was be too much if I went that route too.

WE: You have many interesting promotional items in your collection. How did you get these?

Timon: The best place to buy obscure special editions is from Ebay. I spent a little bit of time everyday on Ebay just to see if anything was added. Since different editions were unique to certain regions of the world, it was important to search through each region’s Ebay: ebay.com, ebay.de, ebay.fr, ebay.it, ebay.co.uk were some of the ones I used most. It was hard work especially with the occasional language barrier, but I was able to get many editions that others were not able to. If there was ever an item I really want in an auction style listing, I would often persuade the seller to sell it to me on the spot before too many other people figure out the listing. 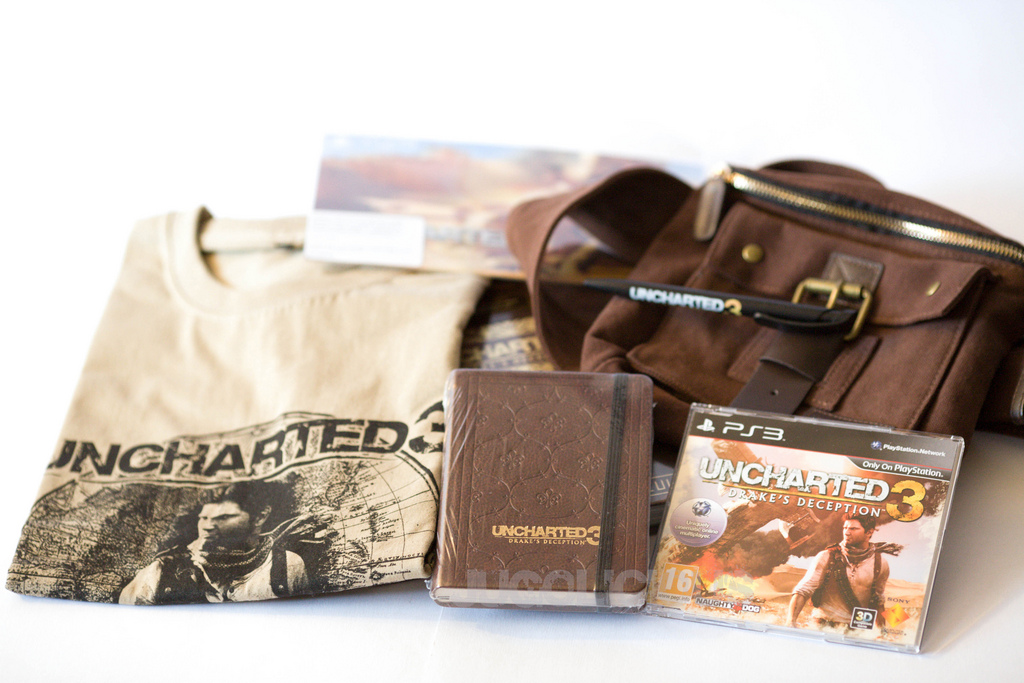 WE: What do you think makes a good collectors package?

1. The outer packaging should be aesthetically pleasing, since it won’t be opened, it has to sit pretty on a shelf.
2. The packaging itself should be sturdy enough to survive being handled by couriers, with some worst than others out there. Any damages to the edition is a big turn-off to a majority people out there, and it also greatly decreases the value.
3. The Interior contents should be exciting and relevant to the game itself. The contents that comes with the edition should be a fair value in relation with the retail price.
4. Physical items are always better than digital items, like DLCs.
5. The rarity of the edition is very important, too many ones out there are overproduced. The more rare an edition is, the more exciting it is when you have one in your hands. The edition being numbered would be a big bonus too.
I’m sure someone that likes to open their edition and appreciate what comes inside would think 3 is more important than 1. 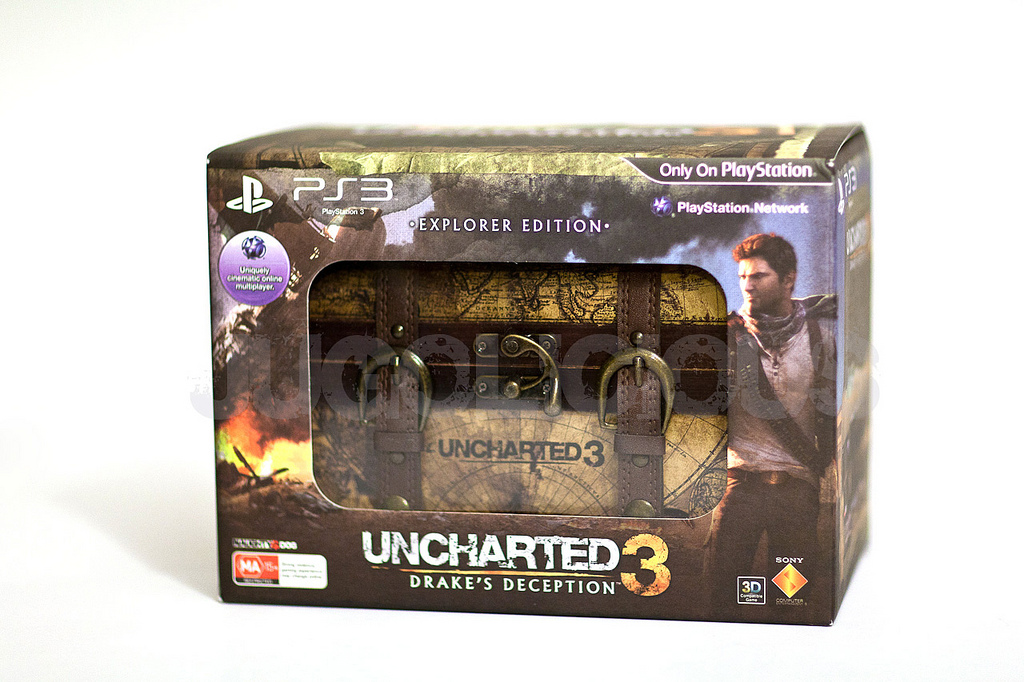 WE: Which is your favorite collector’s package and why?

Timon: It is hard to choose one favourite, but rather I’ll do a top 3:

1. Uncharted 2: Among Thieves Limited Folio edition (Publisher’s Proof): Any artbook by Ballistic Publishing is absolutely top notch, and it was awesome that the Uncharted 2 got to be part of their work. I was searching for a sealed one for a very long time (I started collecting after it was sold out on the site), but when I saw a publisher’s proof one for sale, and I was very excited about it. The main difference is the publisher’s proof one isn’t numbered, since it was given away to a small amount of people. The retail one was numbered out of 200, and there are probably less than 10 publisher’s proofs, so I was willing to overlook it from being sealed. It was also nice to be able to appreciate the artwork done inside the book too.

2. Uncharted 3: Drake’s Deception Adam Hughes Poster + Test Sampler Game: The regular Uncharted 3 Poster by Adam Hughes was numbered out of 5000, but this one is a little more special. This one was unnumbered and has many signatures from the Naughty Dog team, the rest of the signatures are on the test sampler CD. I got this one from a charity auction, I was a little sceptical at first, but I was able to get Mr. Evan Wells himself to confirm the legitimacy of the listing. The test sampler CD was also very unique, but I didn’t have enough knowledge in that branch of collecting to utilize it (if there was anything different in that CD from the game). 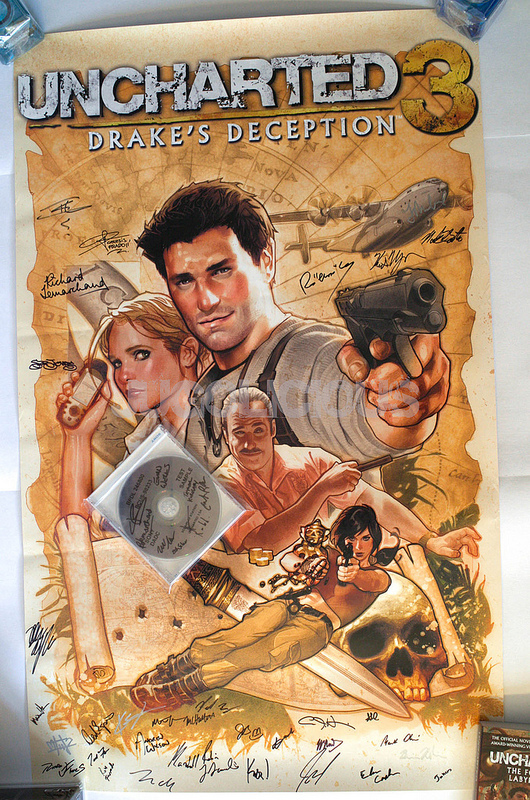 3. Uncharted Drake’s Fortune PAX2007 Concept Art #19: Everything about this memorabilia is awesome: the artwork itself is great, high quality frame, signatures, and numbered! The first 20 were numbered (if I recall correctly) which makes the first 20 that much more special! This was a very sought after piece for the Uncharted fans, and I had the luck to get 2 myself. 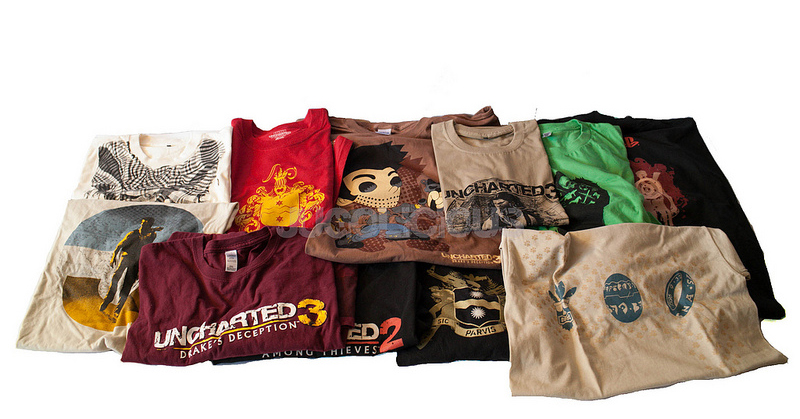 WE: Which items were missing from your collection that you desperately wanted?

Timon: I always thought there were 3 big things missing in my collection:

1. The most obvious one is the big Fortune Hunter Edition for Uncharted 2: Among Thieves. This edition had the common myth of having only 200 produced for the Subway contest, but through some research, I found out it has a bit more. I wouldn’t say it is very rare, as I do see it on sale quite commonly on Ebay, so I wasn’t too worried about that. Since i was a student without a steady income, the price was the reason I couldn’t get it.

2. There was a Uncharted 2 gold coin in New Zealand that was given away in 2009, I was not able to find any sellers for it. This piece would probably one of the rarest item to obtain for Uncharted collectors.

3. The last one would be a kit, which includes a watch in a box and a bag (I don’t recall where it came from). I saw a couple for sale on Ebay, but unfortunately, I was not able to win it. 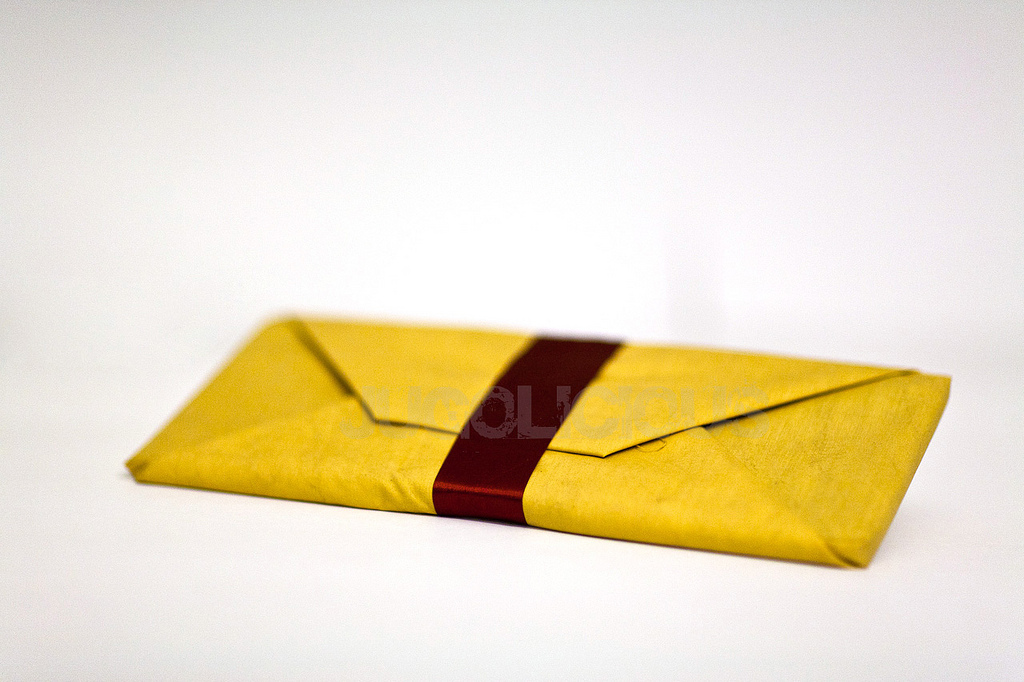 WE: Why have you decided to quit collecting more Uncharted games?

Timon: I started collecting when I was a student in university. When it was time for graduation, it was also time to pay back my student loans. I had the choice of selling half my collection only, but that would have killed all my motivation to continue collecting. I had to make the hard choice of selling my entire collection unfortunately. 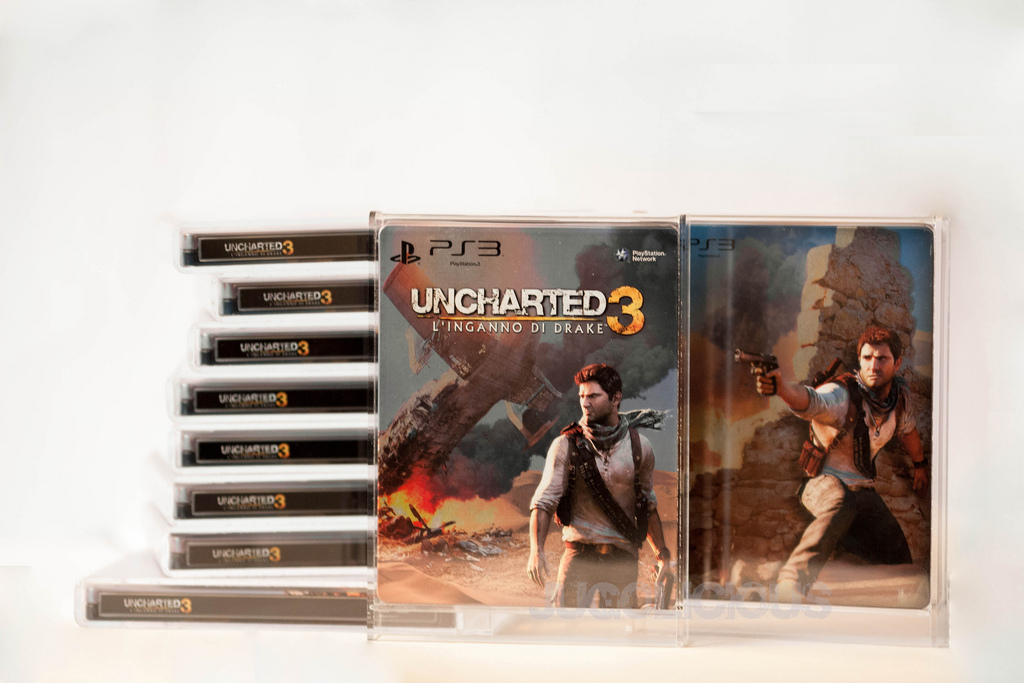 WE: How did you sell your collection?

Timon: My collection received a lot of attention from the gaming community. Throughout the 2 years of collecting, I have received many requests of selling pieces of my collection or even the entire thing. I ended up selling the majority of my collection to two dedicated Uncharted collectors, who I knew would truly appreciate it and knew the story behind each piece.

Which limited item is your favorite? WE are really curious, so tell us in the comments!