Although WE were really sad when Rocksteady Studios decided to delay Batman: Arkham Knight to 2015, our grief eased when they revealed the special editions of their upcoming game. Unfortunately, there aren’t so many, but they are packed with a lot of awesome goodies in exchange. If you are a huge fan of the Arkham series and can’t wait to get your hands on the next game, these editions will be real treasures for you. Find out which one you should get!

The biggest and most expensive special edition for Batman: Arkham Knight is called the Batmobile Edition, and for a good reason. Its coolest extra is undoubtedly the huge statue of the Batmobile, which is fully transformable. It’s a highly detailed statue of Batman’s vehicle from the game, which is pretty similar to the one you can see in Christopher Nolan’s Batman movies. However, this is not the only extra in the $200 Batmobile Edition. It also features a unique steelbook with the game disc in it, a limited edition comic book by DC Comics, a 80 page artbook with gorgeous, colored arts and a skin pack which features three unique in-game skins from the New 52 series. 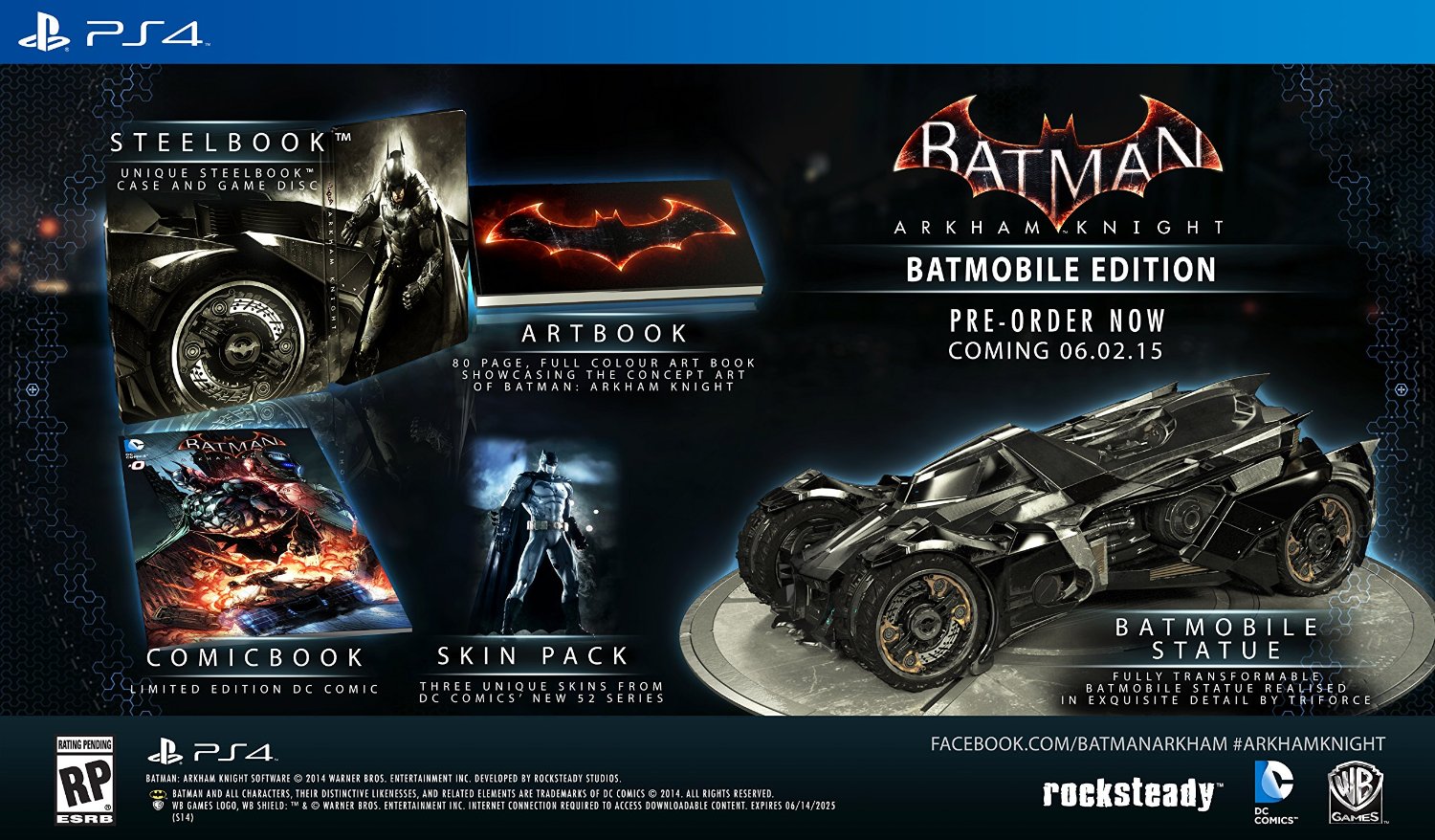 Batman: Arkham Knight will be available in a cheaper special edition for $99.99. Although the Limited Edition is 100 dollars less, it still includes a statue, but not the same. Instead of the Batmobile, it features a limited Batman statue which is 12 inches tall. It also has a cool stand, which is basically a miniature version of Gotham City. The other extras are identical to the Batmobile Edition, including the limited edition comic book, the unique steelbook case, the 80 page, full colour art book and the skin pack. 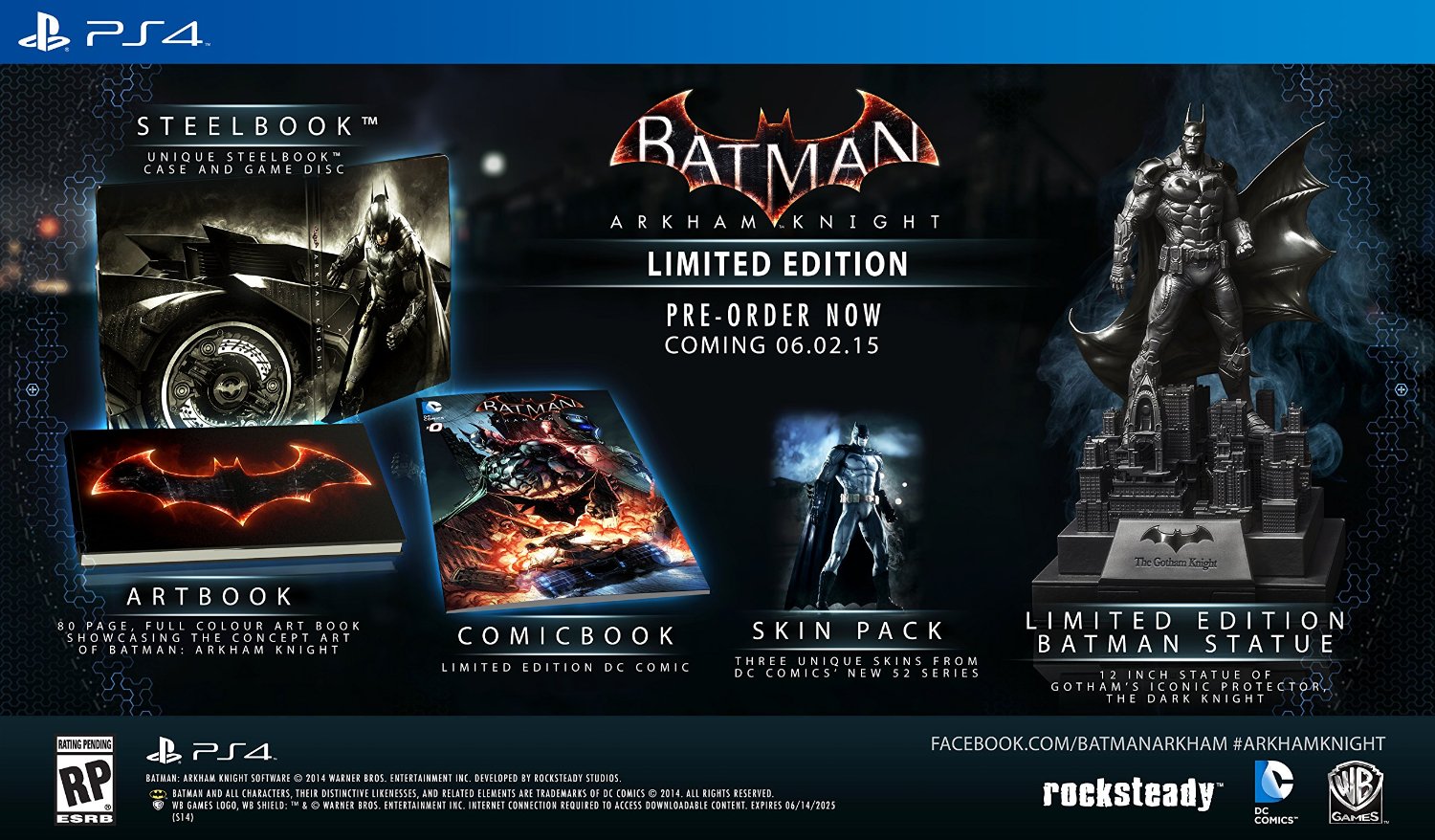 Batman fans who pre-order the game from GameStop will receive two additional DLC packs, which expand the story of the game. One of the story packs is called „Red Hood”, in which you can play as a ruthless vigilante, while the Harley Quinn pack, as its name states, let you play as Harley Quinn. She will have specific weapons, gadgets and abilites. It’s important to know that only the Red Hood expansion is GameStop exclusive. The Harley Quinn DLC, which includes four challenge maps, is available at other retailers. 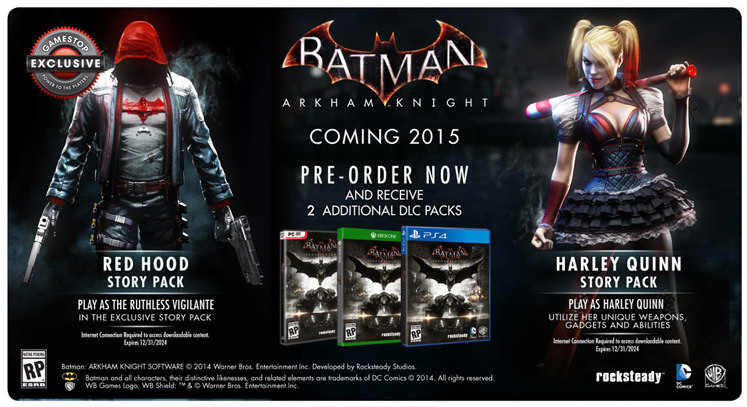